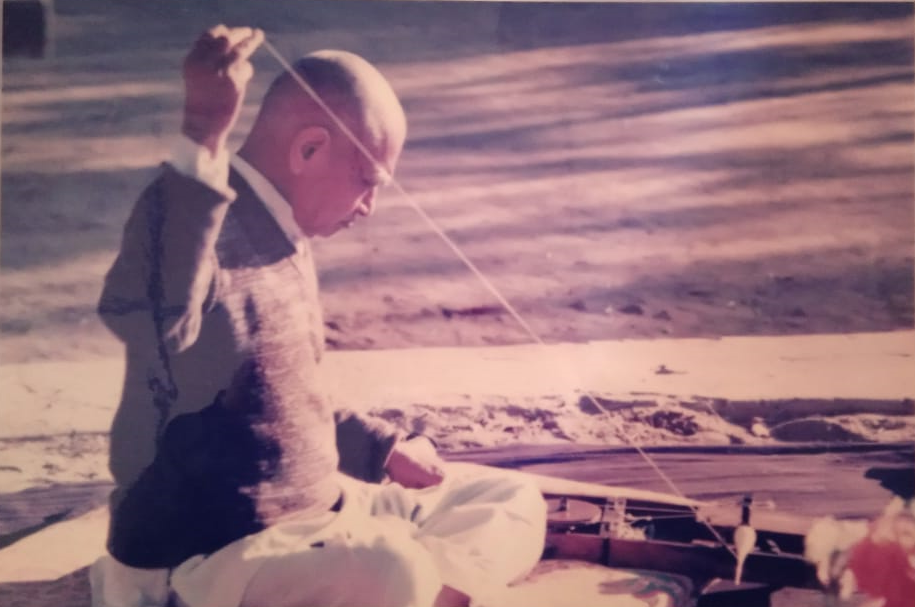 With the inspiration from Late Shree Babubhai Shah ( Ziliya) and cooperation of Shree Maheshbhai Bhanshali ( Bhanshali Trust) , in 1978 Late Shree Manibhai Sanghavi founded the Gram Swaraj Sangh.  Hari Om Ashram Nadiyad (Late Shree Nandubhai and Late Shree C.D Shah) provided warm support in the initial phase of this organization. “Khadi”,“Village Support”, “Constructive Social Works” were undertaken by him even before the attainment of the Independence.

At the early stage of adolescent, Late Shree Manibhai was soundly influence by the renown academician of Kutch Late Shree Nanalalbhai Vora and  Late Shree Mavjibhai Ved and this naturally take  him to  the works and visions of Gandhi, Khadi and Project of Gram Swaraj. Late Shree Manibhai devoted his time and energy to work of popularizing Khadi and economic impact on society in the initial phase and later turned to the lifelong task of the work of ‘‘Bhudan” ( Land Donation) and “Gram Dan” ( Village Donation). In the old age, with a view to envisaging the overall development of deprived and poor and villages to create an atmosphere conducive to the construction of Healthy and vice- free social set ups with the experimentation of self reliant and labour oriented society, he founded “Gram Swaraj Sangh”.  He selected the much interior and underdeveloped area of Rapar and Bhachau talukas of Kutch as his area of service. The same area was selected by Late Shree Maganbhai Soni, Late Shree Dayarambhai Kevariya and Late Shree Jagashibhai Doshi to extend their quality service for poor people. 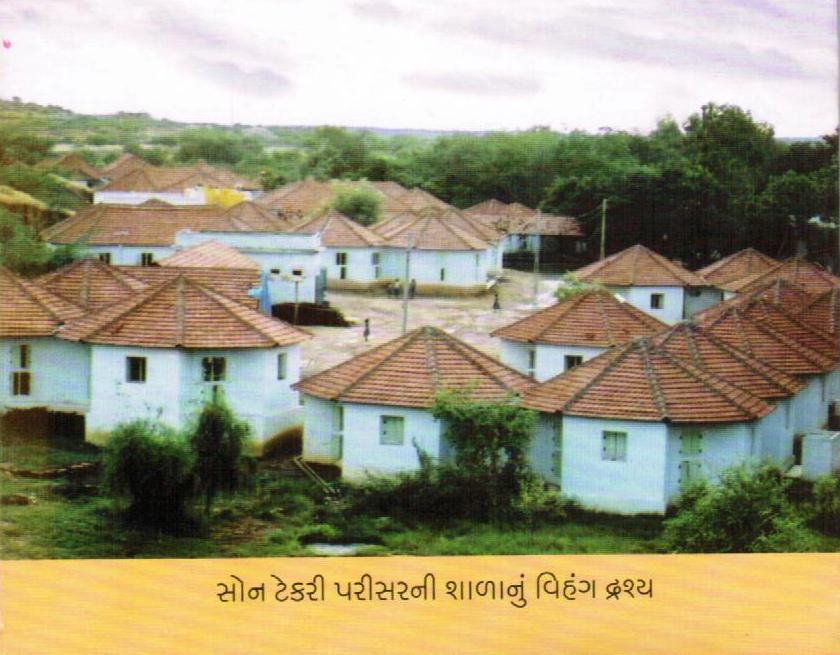 Gram Swaraj Sangh is famous as “Son Tekari”. The premises of beautiful surrounding are located on Rapar – Nilpar road at Six Kilometer distance on the southern direction from the Taluka place Rapar. The brooks of various welfare works like “Environment and Health”, “Education and Character Building”, “Public Awareness and Unity” has kept flowing and keeps flowing with its incessant flow.

Once branch of institute is also at works at Vallabhapur – 15 Kilometer east to Rapar. It was started by Late Shree Maganbhai Soni and Late Shree Manibhai Sanghavi in 1951 as a centre to provide boarding to the “Adivasi Koli” students of this area. Today it is functioning as full residential school providing education 200 students. 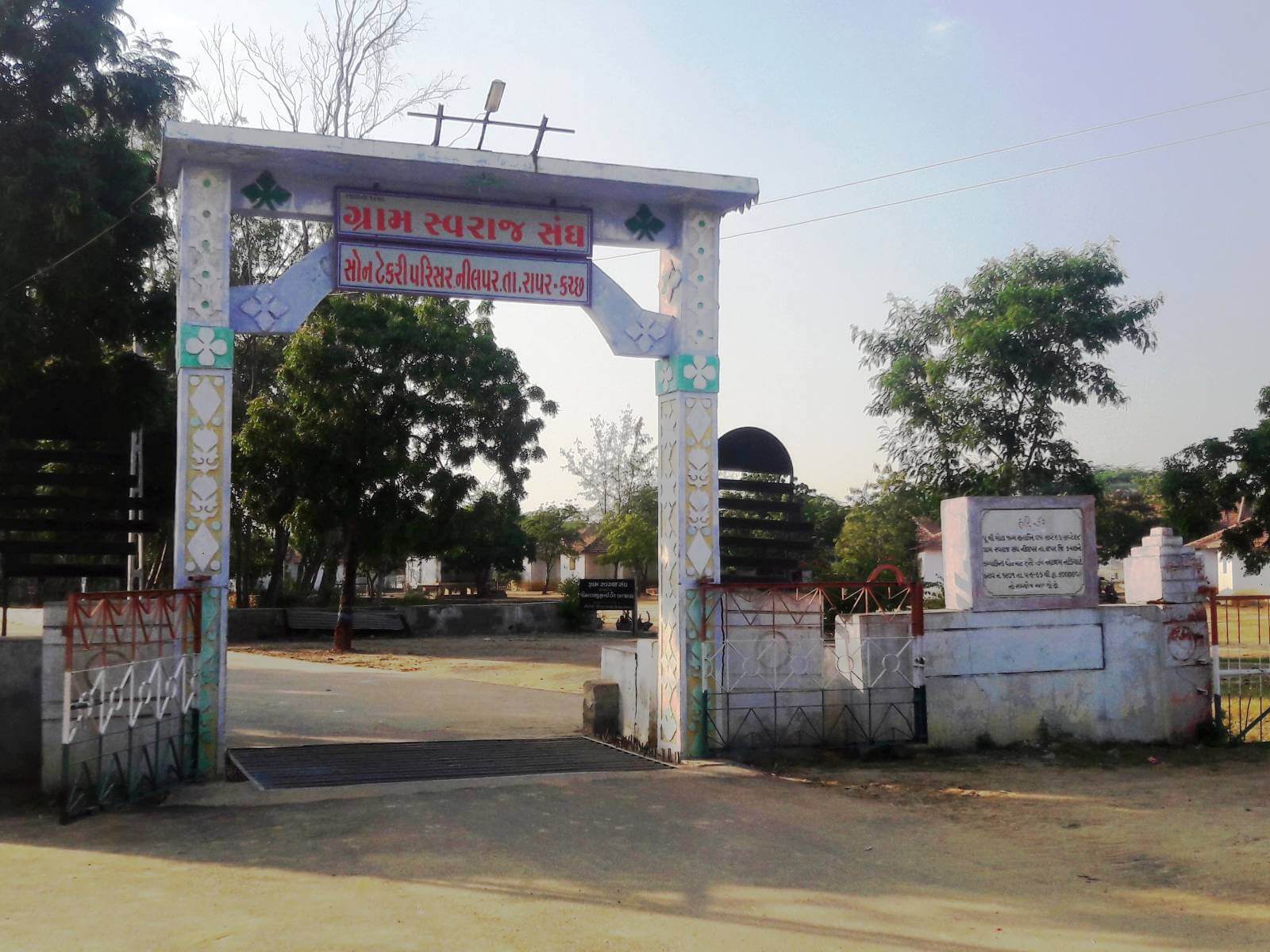 Lightening the Lamp of Knowledge

Rapar and Bhachau Talukas area located on the edge of the white dessert of Kutch District. It is the home for neglected and discriminated tribal people from centuries. Trust is working for them.

As a result of its efforts for a long stretch of time, till the date hundred of children of this area have a got ascent and got settled at respectable position in social and professional institutions. Overall literacy rate of area is considerably low as compared to the other districts of Gujarat and so far as the girl child education is concerned the area would not be second to the last. After great awareness campaign by the institution now comparative a large number of girls have joined the schools and taking good education. The percentage of 2% Literacy among girl child education has risen owing to the financial responsibilities carried out by the institution for the girls education in this area by establishing a fully residential school run on donation of well wishers and now from any Government agency. Today there are 120 girls are studying in the said school and the average expenses for a girl’s education, lodging and boarding reaches up to Rs.15, 000 per annum.

Now- For such a noble cause financial donation seemingly remains a welcome gesture.

The policies and principles adopted for educational trainings and consist of compulsory Boarding and physical labour. These things impart uniqueness go our academic strategies. There are 500 students in several Hostels of institutions. The “Community life” is the very basis that makes the students aware of the humane values of cooperation, coordination, self reliance, simplicity and austerity. When the principles take shape in to personal experiments and first hand experiences, they create real stuff of human personality. And as per this, whole academic tear is kept teeming with various activities , celebration of several festivals, fairs, tours and travels and also celebration of several special days, praye assemblies and meetings. We firmly believe and have seen it happen too, that such activities ensure unique energy enthusiasm, confidence in to student’s personalities and prove a stern stride in making them sound citizen of society.

Dawn of Awareness After Darkening Nights:  (Outcomes of our academic Endeavors)  The  of Rapar- Bhachau Talukas consist small habitations where people live on their groups of Twelve to Fifteen families- popularly known in the vernacular language as “Vandh’’ ( Hamlet). Perhaps – the number of such habitations might exceed the number of villages of the area. Sometimes some such habitations would not be found on the Government records or no Government officials or representative would have visited them. Even today, almost seven decades of independence, the plight is the same. Such habitations are mainly found in the interior parts where they have known  no infrastructural facilities such as a roads, electricity, water, education, health etc. People, mainly the “Parakara Koli” and “Deshi Koli ” lead nomadic life- migrating from one place to another where they get bread. Being uneducated and without any professional or technical skill or knowledge the works of manual labour or physical exertion fall to their share. They would get the works of physical hardship like making charcoal or digging foundation of building sites, agriculture labour or collect forest produce like Honey or Glue. After the social awakening endeavors of the institution, now they have got some awareness and started to get united. Now they have started to settling to fixed places and their habitations area now erected with the basic infrastructural facilities. Apart from this “Vandh” kind of habitations, the other villages area also mainly dependent on agriculture and animal husbandry activities.

From the very initial stage Gram Swaraj Sangh has worked for such backward and ignored classes of people and has consistently endeavored to bring them in main stream of society.  The story of success of such endeavors can be seen reflected in the many public awareness programmes, public education activities and exercises of bringing people under umbrella of unity undertaken by the institution independently or with the support of individual Donors, Government Organizations or Non Government Organizations. Generations of the local people have got access to the light of knowledge and benefited themselves with the various awareness programmes undertaken by the institution. One thing is to note here that all the activities and programmes are oriented at the ascent and rise of the local people and are undertaken with the co operation of the people themselves.

In three decade’s journey the institution has effected miraculous changes in the area and to enumerate each of them one by one seem quite impractical. Still lets have some of the land marks creates during the journey…

Imparting education among the habitants of the “Vandh” habitations, providing drinking water facilities, securing ration cards and housing facilities, bringing them under the umbrella of unity , inspiring the persons from their own group to take the lead and raise the voice for basic rights.

Many Near and Dears, well wishers have contributed generously and supported whole heartedly in the nurturing the small sapling of the institution in to huge Banyan tree and without their warmth and support the journey of the institution would not have turned into a shining reality and glowing glory. As the poet Ravi Thakur has sung with full throated ease;

As consequences of such love and affections of well wishers have enabled the institution to proudly bag the medals and awards of social recognition.

All this is the result of the deeds undertaken with selfless sensibilities and deep determination of service to mankind.

DROP OF CONTRIBUTION: Your generous financial contribution would be inspiring gesture to us keep the flame of social work burning. You should feel free to send/transfer your funds through Cheque Or Demand Draft payable to “Gram Swaraj Sangh”.